WeStopFear is developed to offer a greatly improved and easier method.

The goal is that WeStopFear will be simpler, easier, safer, more natural and bearable and achieve greater success levels with better ongoing support.

WeStopFear is not just for dogs or horses but for ALL types of pets.

You can sign up now and start helping your pet or animal.

WeStopFear is for all types of pets with sensitive hearing – choose your type:

WeStopFear is for all types of pets and companion animals that we humans keep for our enjoyment. It is not just dogs that can suffer from noise phobia. These are dogs, cats, pet birds, small mammals (rabbits, guinea pigs and hamsters), horses, and exotic pets (including ferrets, degus, gerbils, sugar gliders, fancy mice, fancy rats, fennec foxes, porcupines and Vietnamese potbellied pigs). 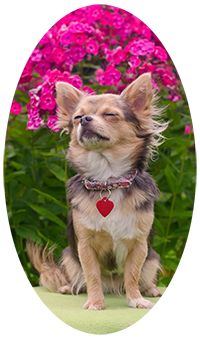 It is clear that if ALL pet and animal owners would practice noise phobia therapy for their pets, then there would be a smaller percentage of pets who experience problems.

There would be a larger percentage of that feel more secure and happy, leading to a better and more enjoyable life and more fruitful relationship with their owners.

Wouldn’t it be worthwhile to seek a better solution?

Well, that is what WeStopFear is developed to do!

Probably the first process design innovation in this field since the 1980’s.

Developed to be better

WeStopFear is developed with the aim to be a process design that is:

Made for ALL pet types

The basic version will be FREE to use forever, so no one has to weigh the options, whether one wants to spend the required money to do this for his or her pet(s) – all pets can benefit from this new noise phobia therapy system.

The process design is based on five steps that make the method simple and secure.

WeStopFear has the animals #1 in mind

There are hundreds of millions of pets and animals in the world, where their situation would be potentially much better if their owners and handlers would conduct noise phobia for them, for prevention or healing.

A greater proportion would be free from unnecessary nervousness, phobia, accidents, injury or worse.

How can we ensure that as many as possible can benefit from this therapy method?

The answer is simple:

Have the basic method FREE.

And that is what has been decided.

It is not “free to try and then you pay” for the fully functioning Basic program.

It will be completely free.

A comprehensive version is then in the making for those who want extra features and convenience.

Choose your type of pet and sign up now:

Will you help other animals?

It’s easy and you will benefit too

There are many pet owners who would be happy to do this for their beloved pets.

… but they don’t know about WeStopFear

You can easily help them by telling them about WeStopFear.

A comprehensive version of WeStopFear is in the making. It will contain several extra features that are convenient. We want to give you access to some of the comprehensive features as a thank you for letting your friends and family members who own a pet know about WeStopFear. More details are in the therapy section after you sign up!

This is entirely unnecessary

The alarming thing is that these are often harmless noises that are a part of our modern world. Humans know well that they are harmless, and even hardly notice them, but pets may not know them or where the noises come from.

Fear of unexplained noises, or in a more severe form, noise phobia, is a hidden problem among pets. It is generally less treated and less prevented than it should be, if we keep in mind the well-being of the pets and recreational animals in human care.

The unnecessary fear can be extreme as this image shows. It shows the difference in the increase of the “fear hormone” Cortisol in a time of extreme fear, among dogs and children. 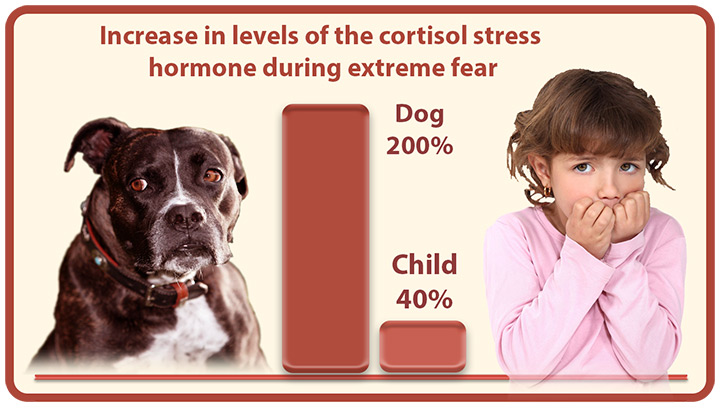 Around of half of dogs may have some problems with noise fear or phobia, although of varied seriousness. 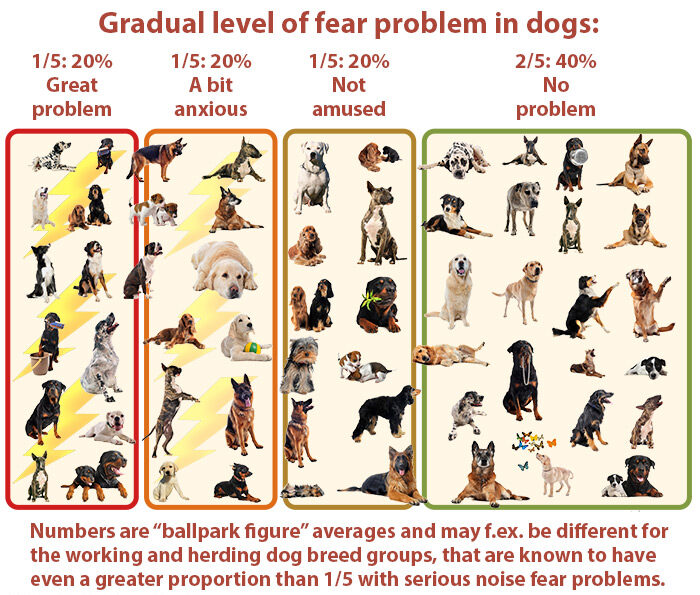 Cats, pet birds and small mammals like rabbits and guinea pigs can be devastated as well. Horses, both big and powerful and also potentially dangerous with the rider sitting on top, are by nature very nervous and can get spooked easily.

What is the promise?

The goal of WeStopFear is to introduce a system that is, as was said above, simpler, safer, easier, more secure, better supervised, more natural and more tolerable.

That is the promise. WeStopFear’s system with Simple Secure Steps based on Volume Anchor, Ascending Loudness and Natural Intervals is an attempt to develop and offer a method, a process design, that is just that.

This does not mean that anyone who tries implementing the system is certain to reach a 100% success. In fact, success in noise phobia therapy is based on six factors, and you can read more about these six factors here.

Is WeStopFear better than the conventional method? Is is easier and simpler to use? That of course is based on the personal experience and the personal opinion of each user. The goal is that it is simpler and easier and all the other things.

I believe the Simple Secure Steps system is a similar development as when the electric stoves and oven was developed, and was an option in addition to previous technology, which was stoves and ovens heated by burning coal or wood. Most people think that electric stoves and ovens are a progress, that they are easier. You just have to turn a knob and it becomes hot, instead of kindling a fire. Still, some prefer burning wood, like traditional pizza ovens in restaurants.

I believe that many will find Simple Secure Steps to be easier, simpler and safer to implement than the previous method. This would increase the likelihood that those persons would actually implement the method correctly and would bear with it to do it and finish the process correctly to the end. That should increase the success rate and improve the situation for those pets benefiting from the process, over what would otherwise have been the case.

In the end, it is all about personal opinion. Each can have their own experience.

But now WeStopFear is up and running and is being offered so that pet owners can do this for free, and they can also get additional features if they help other pet owners by bringing to their attention that this first innovation since the 1980s exists. The pet owners can then investigate this if they like and form their own opinions. (Later on, users will be able to enjoy even more additional features that should make this even more convenient to implement, for a low fee).